Broughton Castle is a moated and fortified manor house near Banbury in North Oxfordshire and is home to the 21st Lord and Lady Saye & Sele, whose family name is Fiennes. The ownership of the Castle has remained in the same family since 1447. Set in parkland and built of the rich local Hornton ironstone, it was selected by Simon Jenkins as one of only twenty to be awarded five stars in his book England’s Thousand Best Houses. The core of the house was built in 1306 and the gatehouse in the early fifteenth century, but most of what you see today dates from the 1550’s. It was a centre of opposition to Charles I and was besieged and damaged after the Battle of Edgehill in 1642. 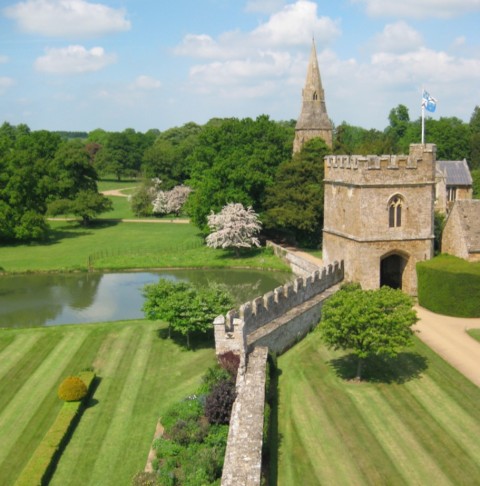 In the late 1690’s Celia Fiennes, a redoubtable young woman who made three major tours of England on horseback, described “my brother Saye’s house being much left to decay and ruine”. She carefully documented in her journals the lay out and state of important buildings and gardens as she went and so provided invaluable historical information.

It is ironic that the squandering of the family fortune in the Regency period almost certainly saved Broughton from the architectural excesses of the Victorian age. William Thomas’s successor, Frederick, 16th Lord Saye & Sele, carried out vital repair work in the 1860’s with the architect George Gilbert Scott. Unfortunately further neglect followed when John, 17th Lord Saye & Sele directed his available funds at racehorses rather than the Castle. He let the Castle in 1886 to the Gordon-Lennox family and they invested in many enhancements to the gardens.

The gardens lie within the protection of the moat so they are not large. The Ladies’ Garden was created in the 1890’s by Lady Algernon Gordon-Lennox and has a spectacular Fleur de Lys parterre which can be seen beautifully from the house roof. There are many roses such as ‘Sanders White’, R. ‘Bonica’, R. ‘Felicia’, ‘Fantin Latoure’, ’Marguerite Hilling’ and ‘Albertine’ as well as Alliums and Salvia turkestanica. Along the bailey wall run the long herbaceous borders planned in 1970 by Lanning Roper. Near the Gatehouse the border has a blue, yellow and grey scheme and includes roses such as ‘Marigold’, ‘Golden Wings’, ‘Windrush’ and ‘Schneezwerg’ together with berberis, potentillas, hypericum and campanulas. Currently there are magnificent Allium Christophii in season.

The castle has been the setting for many historical TV and film dramas most recently Wolf Hall and this ancient family certainly does not lack talent today. There are two actors; Ralph and his brother Joseph; a writer, William and a painter Susannah Fiennes as well as the renowned explorer, Sir Ranulph Fiennes.

Flora Garden Tours visit this garden on the Cotswold tour.