I discovered Flora while surfing the net . Visiting the gardens of England has been a dream for years―our brief visits to the UK (usually to London) were always in February-March. I decided finally to “go for it” in flower season and Flora Garden Tours proved a marvellous experience for me.

After a year of correspondence, Flora seemed my kind of tour―small, relatively short (I didn’t want to get gardened out!); and reasonably priced and Barbara Sommerville seemed great fun.

Fun indeed! Barbara is a tall red haired lady with a healthy sense of humour and―most important―a deep love and knowledge of gardens. My fellow tourers―five of them―were equally attractive folks and all avid gardeners.

We all first met for supper at a pub called the Royal Oak in Ifield. Ifield was once a village in its own right before it was absorbed into the edge of the New Town of Crawley in 1956. Ifield is marked on 16th century maps, and has been designated as a Conservation Area because it has retained its character as a small scattered rural settlement. A delightful four mile field walk has been mapped out by the residents. I didn’t do that―next time! April Cottage Guest House there was our home away from home. Brian and Liz Pedlow have created a comfortable and friendly B&B and Brian does courtesy transport to the nearby rail station and Gatwick―only 10 minutes away. They also have a well planned garden, in which we were welcome to sit. The living room was free to us for Barbara’s evening slide lectures.

Most of the gardens we toured are administered by National Trust, and can be found on their web site: http://www.nationaltrust.org.uk. I have noted other sites in the following little travelogue. 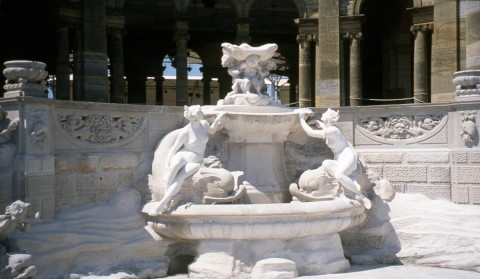 Day1 was a brief visit to Roger Platt’s Garden Design and Nurseries then on to Hever Castle, Edenbridge, Kent with Dave, our sunny-natured driver for the tour. (Dave had a knack of getting mildly lost on the wickedly twisting narrow roads―we learned to take it in stride.)

Hever features a romantic, double moated castle, once the childhood home of Anne Boleyn. I sat in the courtyard, and marvelled at the age of the timbers, and intimate nature of the surroundings. The award winning gardens include Italian, rose and Tudor gardens with a maze and huge man-made lake. The Ann Boleyn walk around the outer perimeter is a must.

Cobblers Garden, Crowborough, Sussex, was reached through the narrowest, most delightfully overgrown roads I have ever been on―like tunneling through green. This private garden, open in aid of the National Gardens Scheme on only five Sundays a year, is owned by Martin and Barbara Furniss. Mr Furniss, a retired architect, conceived the plan for 2 acres of garden entirely in his head. It was designed and constructed in about six years, from what had been little more than three old orchard fields. The buildings, a Sussex farmhouse and barn, date from 1600. The colourful brochure lists a few of the owner’s favorites from the thousands of plants now there, such as the large rose, The Garland, climbing an old apple tree, various lilies and true geraniums. Intricate paths seem to go on forever through this charming spot―I hated to leave.

Day 2 started with another private Garden Scheme spot―White Cottage. Two men have turned this into romantic wonderland. I loved the vistas through gates, arbours and bowers. The planting seems casual, but the colour is actually exquisitely planned.

On to Penshurst Place, Penshurst, Tonbridge, Kent. This is the magnificent ancestral home of the Viscount of De L’Isle, who still lives there. The gardens retain a formal Elizabethan framework , and were laid out by Sir Henry Sidney. The manor house that lies at its centre is the finest and most complete example in England of 14th century domestic architecture. The garden manages to be both formal and cozy. The mile of yew hedge criss-crossing much of its 11 acres creates a series of small rooms. The herbaceous and rose gardens are simply breathtaking!

Wakehurst Place, Sussex is managed by the Royal Botanic Gardens, Kew. The 170 acres of gardens and woodlands contain many species not found at Kew, and the Loder Valley Reserve is an important refuge for native plants and wildlife of the High Weald. This is a wide open space which contrasted wonderfully with Penshurst.

That evening we listened to Barbara’s fascinating slide talk on “ The Modern Medieval Garden”.

Day 3 brought us Wisley, Woking, Surrey, the main garden of the Royal Horticultural Society since 1904. This 240 acre site is an educational delight as well as being breath-takingly beautiful. I was especially happy to view the new herbaceous borders designed by Penelope Hobhouse. I have a book she wrote on the gardens of Gertrude Jekyll―her work at Wisley demonstrates that great gardener’s spirit. Wisley is really overwhelming―virtually everything that grows is there somewhere.

We reached Polesden Lacey, Great Bookham, Surrey late afternoon―I am so glad we took it in. The Regency villa and gardens show off the energetic and romantic sensibilities of Mrs Ronald Greville, a famous Edwardian hostess. Everybody who was anybody visited―the photos of the rich and famous are fascinating. This is especially a rose lover’s place. A garden made for dreamers.

That day we met Barbara’s delightful assistant leader, Shirley Tasker, for the first time―a young garden specialist who has a new job managing a garden just South of our area. We envied her the job! Shirley hosted our slide show in the evening―a look back and forward to our next garden treats.

Nymans Gardens, Handcross, Sussex was the feature on Day 4. All the long views over the North Downs as we travelled, had been wonderful but Nymans was in an almost unbelievably beautiful setting. The Lime Avenue walk to the house is spectacular. This is also a romantic garden, complete with heart-breaking tragedy. The house was destroyed by fire in 1947. The shell of the Great Hall still stands, now covered with flowering vines. This is one of the many gardens to have suffered the deprivations of World War 2. Nymans is one of the first gardens taken over by the National Trust, in 1953. The Messel family’s energy and creativity still vibrate in the home and plantings. I rated it my number one garden of the Tour.

And dear Standen; (East Grinstead, Sussex! This is where I lost my heart, and I must return. Relatively small (12 acres), one can really imagine living here. The house and grounds are developed along the natural lines promoted by William Morris. The Philip Webb house designed for the Beale family is a showcase for the Arts and Crafts Movement. I drank in the gorgeous Morris wallpaper and textiles. The Beale family was “crafty”―many items were handmade by the women. Shirley treated us to the history of garden plants in her evening lecture.

Day 5 took us to Hampton Court Palace Flower Show via a ferry ride down the Thames! The houseboats were a treat―gardens even on them. The event was staggering in size and in crowds. The show gardens were spectacular― put in just for the event and looking as if they had been there for years. If it had anything remotely to do with a garden―it was here. I got a kick out of the tackiest garden kitsch I have ever seen being flogged. Like all great big shows―a heady mix of the sacred and profane!

Our little band met with the Texans, who were just finishing their FLORA Rose Tour, at The Bell Inn. This friendly pub in Sunbury―home of our ferry service―provided us with tea and a happy final-photographs-of-new-friends venue. The Texans had obviously had a good time too.

We said goodbye to two of our six. That evening most of us headed off to the delights of an open air Jazz Concert in the grounds of Nymans accompanied by Liz and Brian and their delicious gourmet supper. A soft summer evening, great music in the twilight of one of the loveliest places in the world―truly heaven on earth.

Hard as it is to choose a highlight, I will try. My pick is a plant called ALCHEMILLA MOLLIS, Lady’s―mantle. I have checked my favorite book,“ The Canadian Gardener” by Marjorie Harris, to see what she says about this plant. On page 142, she describes it thus:

a popular herbaceous perennial, commonly found in English gardens. It was originally supposed to play a part in alchemy, hence its name. This is one of my favorite plants. It will hold the last drop of dew in its saucer-like leaves. Another touch of magic. Uses: Harmonizes well with other plants, makes a good ground cover and is excellent for cut flower arrangements; use it under shrubs; as a hedge; plant it with almost anything, or in a special area on its own. One of the most practical perennials in the garden. Colour: Beautiful foliage plant with downy, grey-green scalloped leaves. Blooms, almost acid green, are in fluted dense clusters above the leaves.

My pictures of this plant, spilling from an old grey stone wall, and in closeup with the mercury-like dew drops clinging are treasures. I will gladly share them and all the rest with you anytime! One of the best things about travel is the re-living of it with friends. I hope you enjoyed this brief tour with me.

Return to Romantic Gardens of Kent, Sussex and Surrey.