The garden lying 1½ miles from the North Sea in an exposed prairie landscape with large arable fields is the home of the unstoppable gardeners, Alan Gray and Graham Robeson who write: 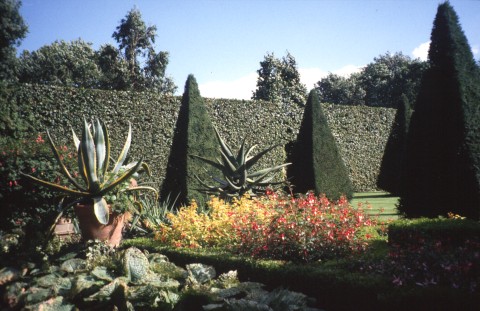 “When we first came to garden in the Old Vicarage in 1986 there was no garden whatsoever, it was a blank canvas. This was no bad thing because it afforded us the opportunity to vent our creativity. Every garden was designed entirely by ourselves as were the various buildings, our sole aim has been to try and enhance the setting of our home. Since many of the wildlife habitats had long been swept away we have endeavoured throughout the garden to replace these by the planting of mixed hedgerows, banks, wildflower areas and ponds. One of our great joys is to see the pleasure the garden brings to visitors, everybody seems to find some part of it that is special to them”.

Their first plantings were a wind shelter belt of Monterey pine [Pinus radiata] and several other trees to protect against the northerly and easterly winds. With these fast maturing trees established the proximity to the coast became a real advantage. In contrast to inland Norfolk the garden rarely suffers any serious frost and benefits from a light sandy loam with a neutral pH which is very free draining. Despite this, the current gardening style near the house depends heavily on container grown, half-hardy species which, although exotically spectacular, do have to be housed in the winter. This creative garden is definitely labour intensive.

There is a superb no-expense-spared built structure to this garden and an endless variety of garden “rooms”, some like the sunk garden, quite large. Ones only problem is finding ones bearings exploring these innumerable gardens- ‘Dutch’, ‘exotic’, red and purple border, Mediterranean, Walled garden and Meadow, to name a few. Throughout the garden you will see many rare and unusual plants growing. Alan and Graham propagate from these in small numbers so that they may be purchased from the plant sales area. Many of these rare varieties are difficult or slow to increase, so if you see a plant growing in the garden that you would like, do ask, they may have some tucked away.

The house is in traditional ‘Arts and Crafts’ style built in 1913 but it is not open to the public.

Flora Garden Tours visit this garden on the Cambridge and Norfolk tour.