Great Dixter was the family home of gardener and gardening writer Christopher Lloyd – it was the focus of his energy and enthusiasm and fuelled over 40 years of books and articles. Lloyd was born in Great Dixter, into an upper-middle-class family, the youngest of six children. In 1910, his father, Nathaniel Lloyd, purchased Great Dixter. Edwin Lutyens, a fashionable ‘Arts and Crafts’ architect, was hired to renovate and extend the gardens attached to the house. Nathaniel designed some of the garden himself and imparted that enthusiasm to his son but it was his mother, Daisy, who did the actual gardening and trained him in the love and care of plants. She introduced him to Gertrude Jekyll, the garden designer in most demand, who often worked with Edwin Lutyens although she did not contribute to the planting design here. 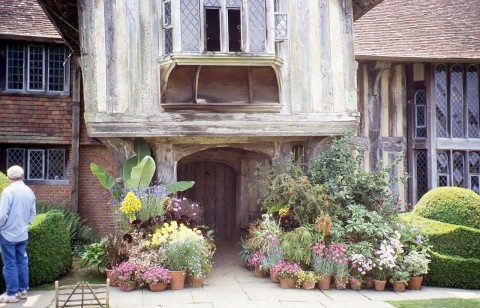 The reason for needing Lutyens was that Great Dixter is made up of three houses. The original timber framed house is not large and dates to the mid 15th century still complete with its ‘Great Hall’ and gallery. The other house is a yeoman’s court house built about the same time but moved from a village several miles away, the timbers being carefully marked before dismantling. Joining the two, Lutyens designed a sympathetic new wing thus creating a large family house.

In addition to his many books, for instance “The Well-Tempered Garden” published in 1970, Christopher Lloyd contributed a weekly article to ‘The Weekend Guardian’ newspaper in which he acquainted his enthusiastic followers with what he had planted last week and his plans for next week. His planting style was eclectic and he loved shocking juxtapositions of colours which had no right to be together but actually looked stunning. He depended heavily on the help of his head gardener Fergus Garrett who still manages the garden as Christopher would wish. He died in 2006 aged 85 and the garden is now in the stewardship of Fergus and the Great Dixter Charitable Trust dedicated to education in all aspects of gardening and plants. This is an unique garden set in the most beautiful context of historic buildings.