These two gardens are next door to each other and present a lively contrast of style. Major Lawrence Johnson made Hidcote before and after the first world war in which he served. It is the first English garden to be designed in a series of garden rooms or compartments divided by yew hedges and it inspired Vita Sackville West’s design for Sissinghurst in the 1930s. When Heather Muir was creating Kiftsgate in 1920 she naturally asked Johnson for advice but the results could not have been more different. Apart from the wilderness and rockery, Hidcote is fairly formal with long sweeps of straight hedge interspersed with topiary and even a feeling of detachment which some have attributed to ‘masculine’ sensibilities. Kiftsgate is much more intimate and has delightful sensitive plantings; quite a ‘feminine’ garden which is not surprising since Heather’s daughter Diany Binny took over from her mother and the garden is now in the guardianship of her daughter, Anne Chambers. There is also an impressive sculpturesque mobile in a water garden that defies gender. 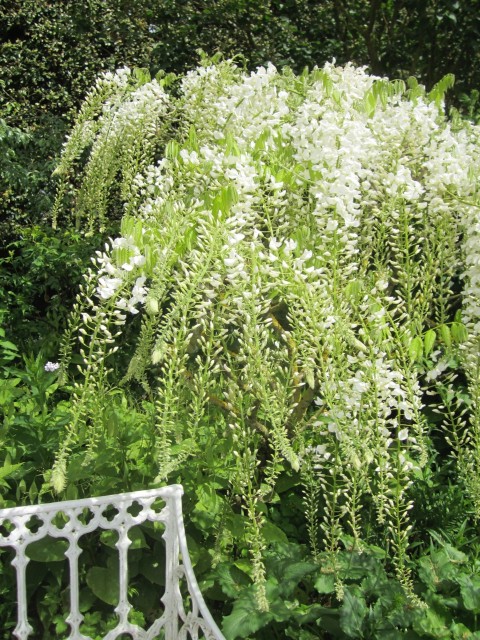 Another marked difference between these gardens is their topography. Hidcote occupies a fairly level site on top of the high ridge bounding the Vale of Evesham. Although Kiftsgate’s house is here too there is only room for small gardens in a crescent surrounding the house before the rest of the garden plunges down a near vertical cliff into the Vale. This affords some very imaginative, not to say athletic, planting on the cliff beside the winding steps and a superb view across the semi-circular pool on the lowest level to the flat plain beyond.

Each of these gardens sponser well known plant varieties; Hidcote is famous for the very popular semi dwarf Lavendula spica ‘Hidcote’ and Kiftsgate for its incredibly vigorous rambler, Rosa filipes ‘Kiftsgate’. This one rose plant, which arose as a unique seedling, solely occupies a tennis court sized area and travels to the top of three mature beeches. Plants grown from cuttings are available at most rose nurseries.

Johnson gave Hidcote Manor and garden to the National Trust in 1948.

Flora Garden Tours visit this garden on the Cotswold tour. 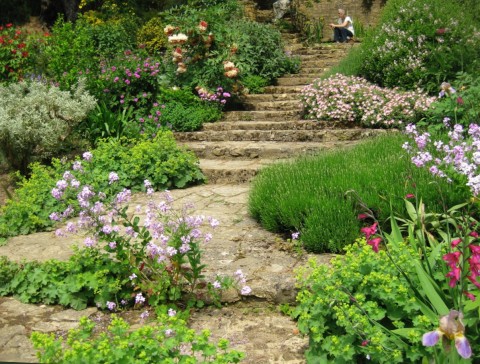 Kiftsgate, at the bottom of the cliff